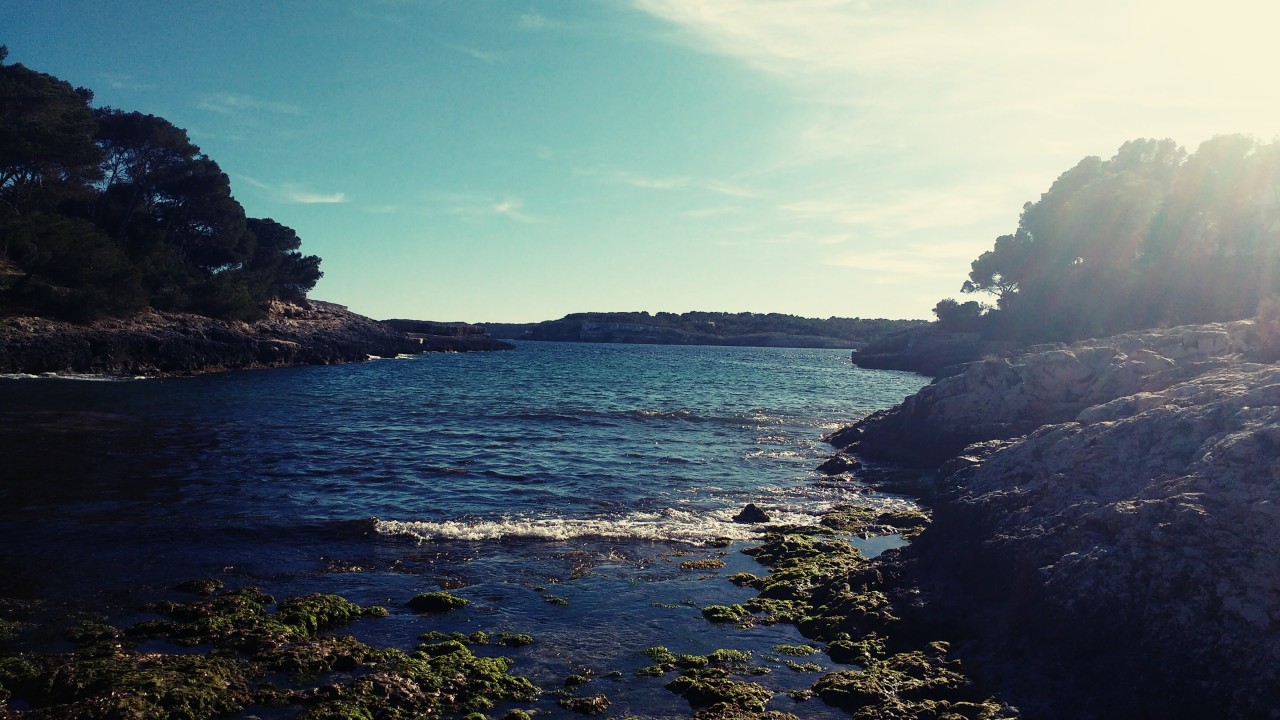 See an explanation for this project here.

I’m obsessed by a feeling. Boredom? Calm? Maybe I’d call it sadness. But that would be too beautiful and serious. The feeling I’m talking about is so selfish that I’m almost ashamed to feel it… and sadness always seemed to me to have some kind of honour. I’ve never felt it before… and I’ve felt boredom, regret, even remorse. Today it folds over me like soft silk. Irritating. Separating me from them.

That summer I was seventeen and I was really happy. (‘Them’ refers to my dad, and Elsa, his partner.) First I’ll explain how we lived, because it wasn’t normal. My dad was forty, a widower for fifteen years. He still acted young and was full of life. When I left the school to join him two years earlier, I didn’t know he was living with a woman. And it took me longer to accept that the woman changed every six months. But I was soon seduced by that new and easy life – it suited me. He was carefree, a skilled business guy, always curious and quickly bored, and ladies loved him. I had no trouble loving him too, caring about him a lot, because he was good, generous, fun, and was full of affection for me. I couldn’t imagine a better, more entertaining friend. At the beginning of that summer he was even kind enough to ask me if Elsa, his current partner, could come with us on holiday, or if it would annoy me. Actually, I encouraged him, I had to, because I knew he needed women, and besides Elsa wouldn’t really tire us out. She was a tall, red-haired girl, basically a call girl, who worked all along the Champs-Elysées in bars and studios. She was kind, quite simple and not super pretentious. Anyway, me and my dad were too happy to be going away to complain about anything. He’d rented a big white villa, isolated and beautiful, on the Mediterranean coast. We’d been dreaming about it since the first hot days of June. It was built on a peninsula overlooking the sea, hidden from the road by a small forest of pine trees. A path down the cliff side lead to a small golden cove, lined with red stone, where the waves crashed and fell. Dad said we should turn our phones off and I loved that. I wanted that holiday to soak into us, isolate us and leave us… changed.

Cut to Opening Credit Music QUEUE TITLE CARD – HELLO SADNESS 2020 over scenes of a sunlit drive to the villa.

The first days there were stunning. We spent hours on the beach, knocked flat by the heat, every hour getting healthier, more golden, except Elsa who reddened and peeled. My dad did some complicated workout to try and ward off the beginning of a belly which didn’t really go with the lifestyle of a seducer. Every dawn I was straight in the sea, submerged in the cold, clear water, cleaning myself of all the shadows and dust of Paris by swimming random lengths around the bay. Stretching out on the sand, I grabbed fistfuls of it and let it escape between my fingers in a soft yellow stream, thinking how it was like the passing of time. An easy thought. It was nice to have easy thoughts. It was summer.

On the sixth day I saw Salil for the first time. He was passing along the coast on a small sailboat when he capsized just outside our cove. I helped him to gather his things in the water and while we were laughing I learned his name. He was a law student and was staying with his mother in a neighbouring villa. He sounded Moroccan, his face very dark, very open, and there was something balanced about him, protective, which I liked. I was trying to avoid university students. I found them rude, and obsessed with themselves, and most of all obsessed with their youth, making it into a kind of reality show, or an excuse for their boredom. Youth was not attractive. I preferred my dad’s friends, forty year old men who talked politely to me, paid me attention, showed the softness of a father or a partner. But I liked Salil. He was tall and sometimes handsome, and had a beauty that gave me confidence. I never said to my dad that our dislike of ugliness meant we often visited stupid people. I also never said that when we visited people with no physical attractiveness whatsoever I felt kind of awkward, like something was missing. Them giving in to being unattractive seemed to me kind of rudeness or weakness. Because what did I aim for in life, other than to be liked? I still don’t know now if this love of surfaces and seductiveness hid an overflowing of life, a taste for domination, or a deep need to be sure of myself, to be confirmed somehow.

Before Salil left, he offered to teach me to sail. I went back up for dinner absorbed in thoughts about him, and didn’t join in the conversation; I didn’t really notice how tense my dad was. After dinner, we lay out on the terrace sofas like we did every evening. The sky was scattered with stars. I watched them, vaguely hoping that some would begin to fall and sail across the sky. But it was only the beginning of July, too early for meteors. They didn’t budge. In the gravel round the terrace, crickets were singing. There must have been thousands of them, drunk on the heat and the moon, to let out such a strange cry throughout the whole night. Someone explained to me that it was only them scraping one front leg against the other, but I preferred to think it was a deep, throaty singing, instinctive like a cat’s in heat. Everything was good. Only a few grains of sand between my skin and my dress kept me from sleeping, even though I was being softly assaulted by drowsiness. Finally, my father cleared his throat and sat up on his sun lounger.

– I should tell you we’re going to have a visitor, he said.

I closed my eyes in despair. It was too peaceful, it was never going to last.

– Go on, tell us who, said Elsa, ready for the gossip.

– Anne Larsen, said my father, turning towards me.

I looked at him, too stunned to react.

– I told her to come if she got too bored with her collections and she sent an email… she’s coming.

Completely out of the blue. Anne Larsen was an old friend of my mum’s, and was only really an acquaintance of my dad’s. Anyway, back when I left school two years earlier, my father found me a nuisance and sent me to her. In one week she had me dressed well, and then she taught me to live. I began to admire her a lot, and she easily redirected those feelings for her towards a young man among her friends. So I owed whatever style I had to her, and my first love, and she knew it. She was forty two, and sexy, very refined, with a proud and beautiful face, but weary and indifferent. The indifference was all I could complain about. She was lovable, but distant. She exuded purpose, and her calmness was intimidating. Although she was divorced and free, she never seemed to us to have a partner. But then we didn’t really share the same friends. She hung out with sharp, intelligent, understated, people, and our lot were loud and drank a lot, cos my father wanted them to be either beautiful or funny. I think she distrusted us a bit, my father and me, because of our taste for useless pleasures, which she hated. All we had in common were the business dinners (she worked in fashion and my father in advertising,) some shared memories of my mum, and then my attempts at living like her, because although she intimidated me, I admired her a lot. Despite that, her sudden arrival was annoying since Elsa was already there, and remembered well Anne’s enthusiasm for homework…

After a crowd of questions about Anne and her situation in the world, Elsa went to bed. I stayed up with my dad, sitting on the steps at his feet. He leaned down and rested his hands on my shoulders.

– Why are you so skinny, sweetheart? You’re like a little wild cat. I want a beautiful blonde girl, a bit more solid, with bright white eyes and…

– Stop it, I said. Why did you invite Anne? And why did she even agree to come?

– You’re not the kind of person Anne likes, I said. She’s too intelligent, she’s got too much self respect. And what about Elsa? Did you think about her? Can you imagine conversations between Anne and Elsa? Cos I can’t!

– Yeah, I didn’t really think about that, he admitted. I’m really worried now Cécile, my dear. Let’s go straight back to Paris.

He chuckled softly while massaging my neck. I turned to look at him. His dark eyes sparkling, small, odd wrinkles at the corners. With a half smile, he looked a bit like a faun. I laughed with him, like I did each time he found himself in a messy situation.

– My partner in crime, he said. What would I do without you?

The tone of his voice was so true and full of care, that I could feel just by hearing it how unhappy he would be without me. We spoke about love late into the night, about how complicated it could be. In my father’s eyes, that was an illusion – faithfulness, sincerity, getting engaged, etc. He explained to me that they were pointless and dead ideas. From anyone but him, this might have shocked me a bit. But I knew that for him, believing those things didn’t exclude being caring, or showing devotion, feelings that he found a lot easier to come by than he would have liked, since he knew they were only temporary. And I was seduced by the idea of short, fast, violent relationships. I wasn’t old enough to be drawn to the idea of faithfulness. I knew very little about love – about sly meetings, being physical – or about fatigue.